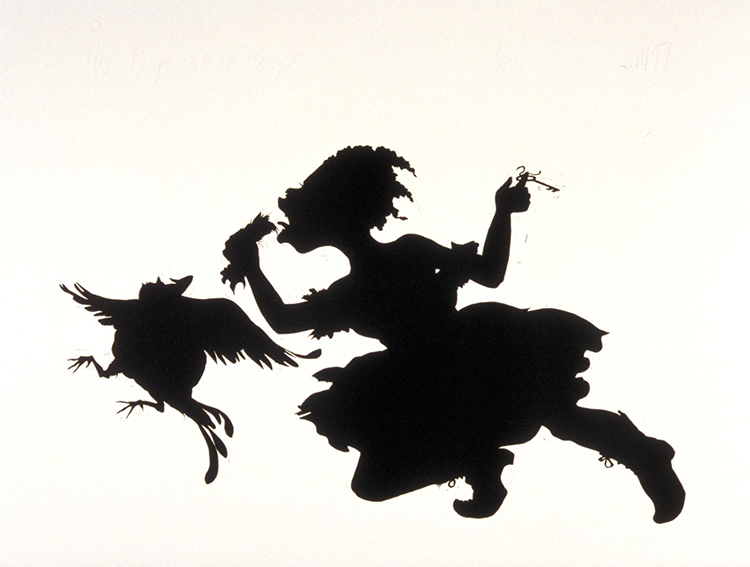 Keys to the Coop

The Keys to the Coop, 1997, consists of a large linoleum silhouette printed in black ink that is mounted on white wove paper and features a young girl and a chicken composed in a cartoon-like style. The girl, who is seen in profile, wears a ragged short-sleeved dress and lace-up boots. She appears to be chasing the headless bird that has its feet and wings raised in a startled fashion on the left side of the work. The girl twirls a key (to which the title seems to refer) on one of her fingers, while in the other hand she holds a feathery object – possibly the chicken’s head – to her open mouth, from which the silhouette of her tongue protrudes. This print is number one in an edition of forty.

Kara Walker was born in Stockton, California, in 1969. She received a BFA from the Atlanta College of Art in 1991, and an MFA from the Rhode Island School of Design in 1994. The artist is best known for exploring the raw intersection of race, gender, and sexuality through her iconic, silhouetted figures. Walker unleashes the traditionally proper Victorian medium of the silhouette directly onto the walls of the gallery, creating a theatrical space in which her unruly cut-paper characters fornicate and inflict violence on one another. In works like Darkytown Rebellion (2000), the artist uses overhead projectors to throw colored light onto the ceiling, walls, and floor of the exhibition space; the lights cast a shadow of the viewer’s body onto the walls, where it mingles with Walker’s black-paper figures and landscapes. With one foot in the historical realism of slavery and the other in the fantastical space of the romance novel, Walker’s nightmarish fictions simultaneously seduce and implicate the audience. Walker’s work has been exhibited at the Museum of Modern Art, New York; San Francisco Museum of Modern Art; Solomon R. Guggenheim Museum, New York; and Whitney Museum of American Art, New York. A 1997 recipient of the MacArthur Fellowship, Walker was the United States representative to the 2002 Bienal de São Paulo. Walker currently lives in New York, where she is on the faculty of the MFA program at Columbia University.